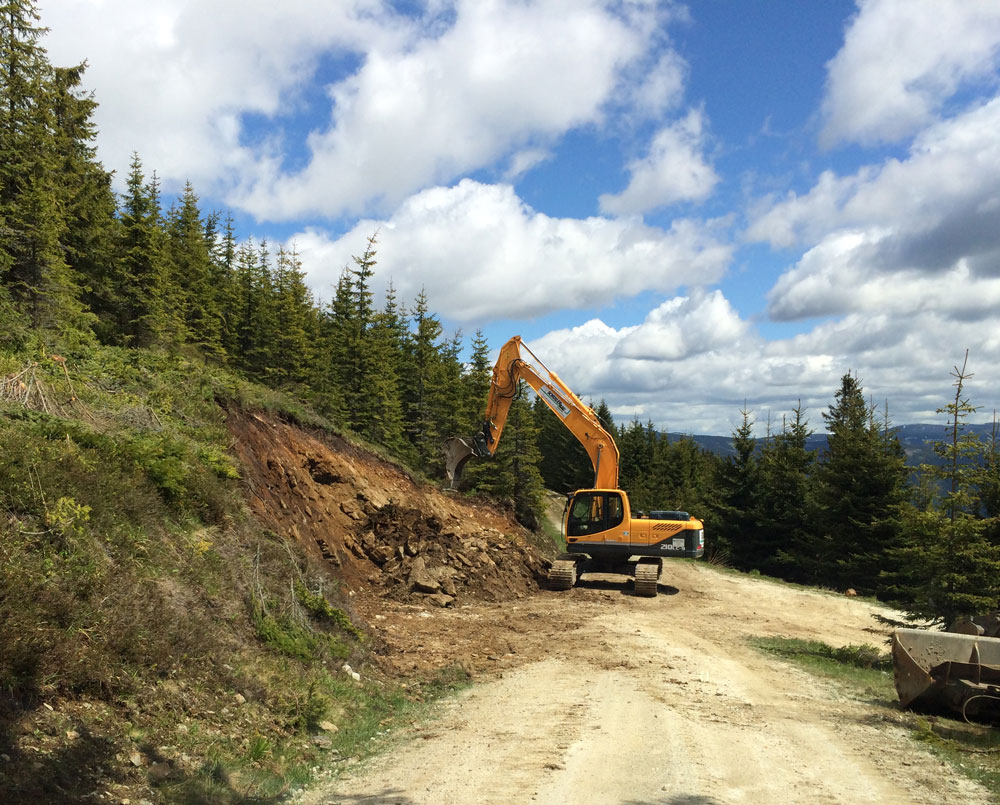 At the beginning of May 2014, construction work started on the Steinriegel II wind farm, located at an altitude of about 1600 m – making it one of Europe′s highest wind farms. The first construction steps included the construction of an access road. Existing roads were expanded and rebuilt and new roads were made to enable the transport of the individual parts. A temporary loading/unloading site was created in the village of Ratten, where all parts were unloaded from the lorry and onto the automated guided trailer, in order to for them to be brought to the wind farm via some very steep and narrow gravel tracks. The manoeuvrability of the Prangl automated guided trailer kept the need to expand forest tracks to a minimum.

We then began excavation for the wind turbine foundations, laying conduits for cables and pouring blinding concrete into the pit that we had excavated. After installing the anchor rings, adding the iron reinforcement cage and conducting a final check of the site, the concrete could be cast. After a precise period of curing, we could backfill the foundation, bringing the first construction phase to a close. 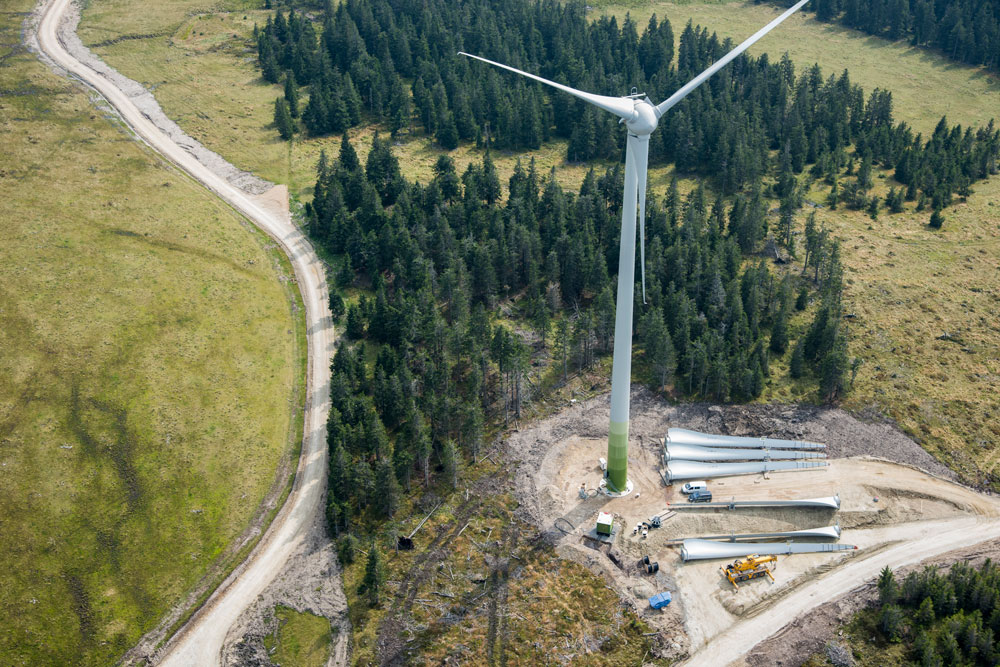 The second construction phase began with the assembly of the electric unit on top of the foundation. Then the tower was erected, composed of four separate parts and with a hub height of 85m, on top of which came the nacelle. The nacelle, which houses the entire machinery, is mounted on top of the tower and is able to rotate so that it can adjust to the direction of the wind.  The final step was the assembly of the rotor blades. These were pulled up ready-assembled and mounted on the hub. This lift, also known as the ‘start lift’, is the most exciting because it is the most wind-sensitive hoist of all. The Steinriegel II wind farm turbines have a blade diameter of 71m. All blades are equipped with heaters.

The first wind turbine came into operation on 21.07.14, followed by the rest of the wind farm at the beginning of November 2014. A total of eleven Enercon E70 turbines were built within a 3-month time frame. Steinriegel I and II wind farms have a total capacity of 38.3 MW and produce some 75,600 MWh of electricity every year – which is sufficient to supply around 24,000 households. Annual CO2 savings amount to a total of approximately 45,000 tonnes. 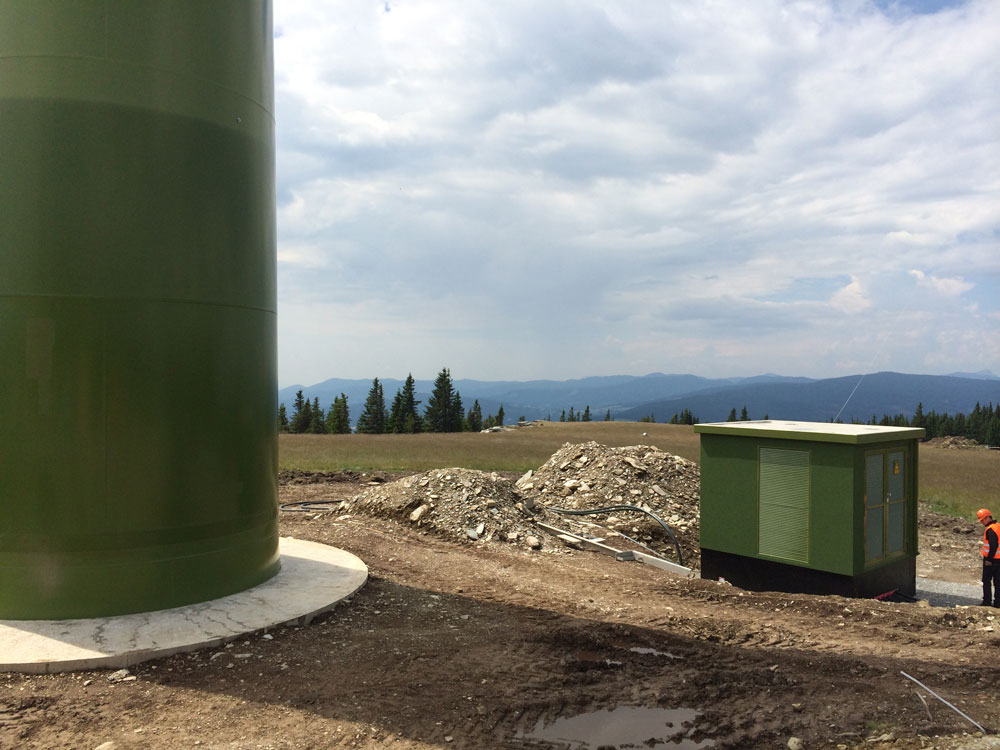 During the third construction phase, the wind turbines were connected to the grid while the turbines were being assembled. The ground was then ploughed for the cable route, cables were laid at a depth of around 80–100 cm and closed in again immediately with soil. Special vehicles were used to carry out these steps fully automatically, which prevented minimum disturbance of the surrounding landscape. Although the turf finishes up slightly higher, this settles back after about six months leaving no trace of any disturbance. While assembly work was being carried out, the cable systems (one system serves as a replacement in case the other is damaged and fails) were connected to the Mürzzuschlag substation, as well as the ring connection cable around the wind farm. The 10-kilometre-long cable runs along a carefully determined route, connecting the energy generated to the public grid at Mürzzuschlag substation. 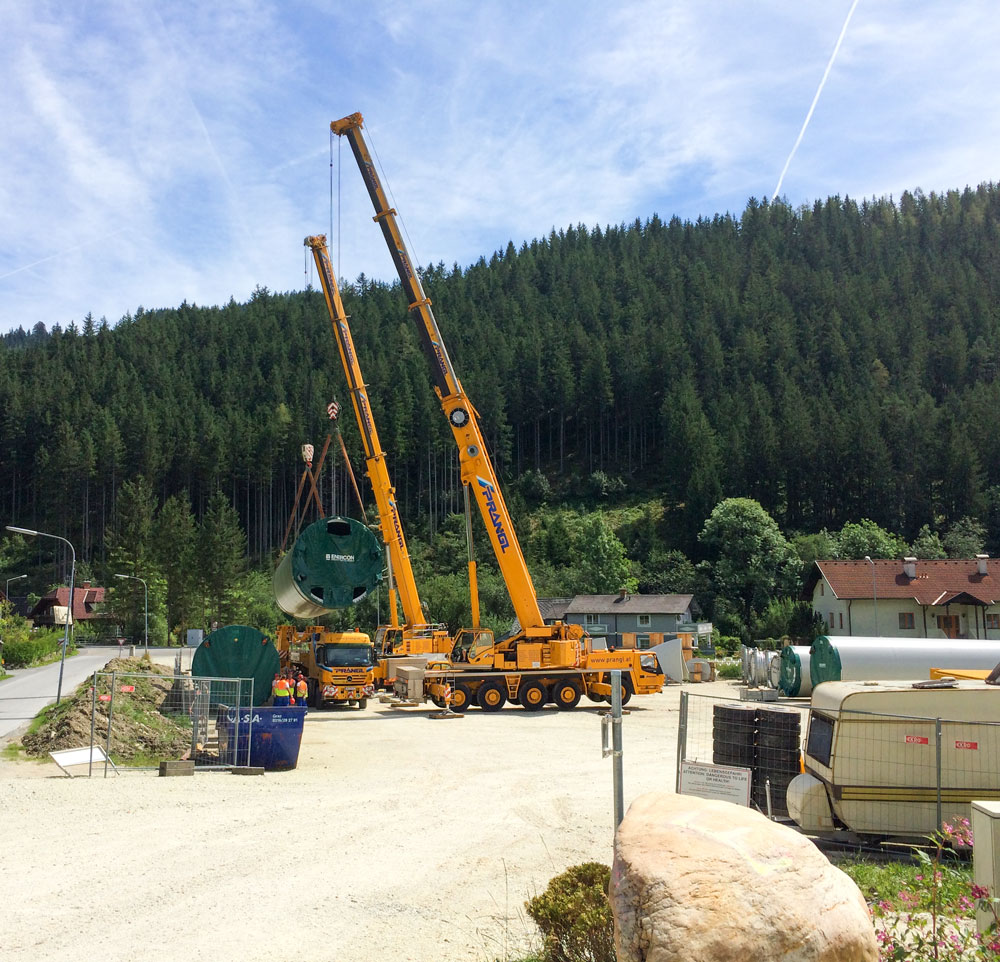 Peripheral aspects – Who is involved in the construction of
a wind turbine?

The planning and preparation phase of a wind farm lasts for approximately 3 years. Landowners’ concerns must be accommodated and terms laid down in a contract. All the necessary permits and authorisation must be obtained. Wind data is measured on the site over a one-year period, enabling us to gain the best possible knowledge of the wind situation. Once this wind data has been evaluated, we decide which turbine is the most suitable and efficient solution for this particular site. After permission has been granted by the authorities of the relevant province, construction can begin. While the wind is being measured for a year, we begin the rough planning for the construction of the wind farm.

The wind turbines were installed by Enercon mechanics, who also carry out ongoing maintenance on the turbines. Checks and inspections are carried out by ECOwind employees. 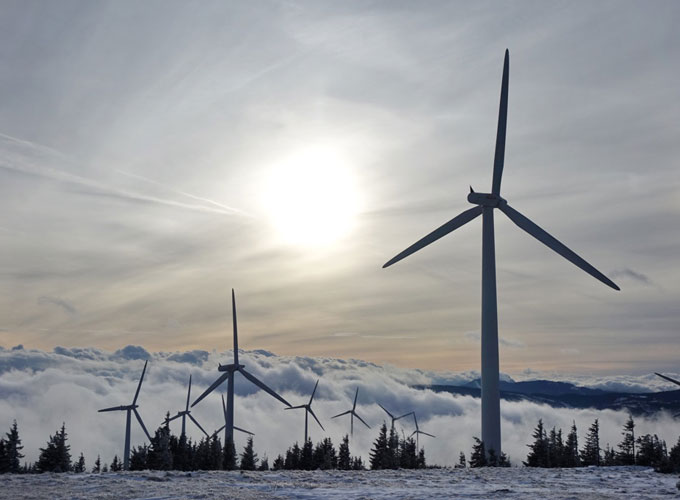 Photos of the completed wind farm

The last wind turbine of the Steinriegel II wind farm was commissioned at the beginning of November 2014, marking the end of construction work.

The image gallery contains pictures of the completed wind farm, comprising Steinriegel I and II.

Groundbreaking ceremony for one of
Europe's largest alpine wind farms

The groundbreaking ceremony for one of Europe′s largest alpine wind farms took place on 8 May in Styria, attended by provincial and local politicians, representatives of the energy supply company Wien Energie GmbH and media representatives. 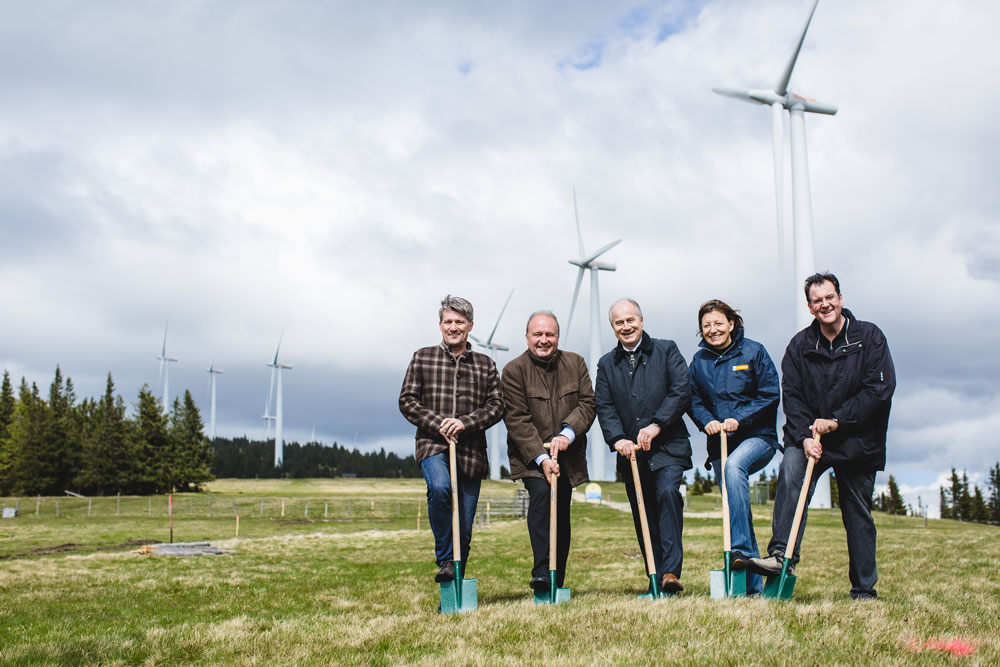 The Steinriegel wind farm was built in 2005, on a mountain ridge of the same name on the border between the Styrian municipalities of Ratten and Langenwang. The farm is located at an altitude of around 1,600 m and comprises 10 turbines with a total capacity of 13 megawatts.

Since the farm came into operation, it has supplied electricity to around 10,500 households without any significant problems arising.

As general contractor, ECOwind has now received new planning permission to expand the wind farm by 25.3 megawatts – a planning application that has taken several years to obtain approval. From December 2014 onwards, 11 wind turbines  will produce approximately 45,000,000 kWh of electricity, thereby supplying another 13,500 households with green energy.

With a total annual production of around 75,000,000 kWh, the wind farm is one of the largest alpine wind farms in Europe.

Steinriegel II is operated by Austria’s largest energy provider, Wien Energie GmbH, which will operate the wind farm in exactly the same way as the existing farm.
Once Steinriegel II wind farm is completed, 107.9 megawatts of wind energy will be connected to the Styrian grid.
The two wind farms on the Steinriegel (38.3 megawatts) and the 4 wind turbines that were installed on the Pongratzer Kogel (9.2 megawatts) in 2013, for which ECOwind is responsible for roughly the half, are testimony to the company’s leading position in wind turbine project development and installation within the southern Austrian province of Styria. 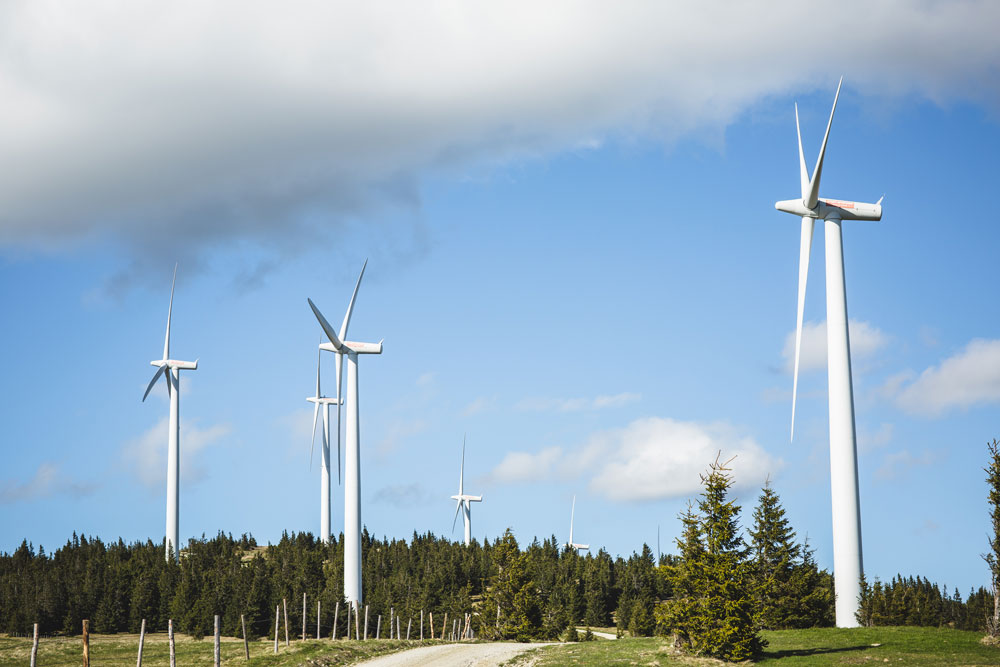